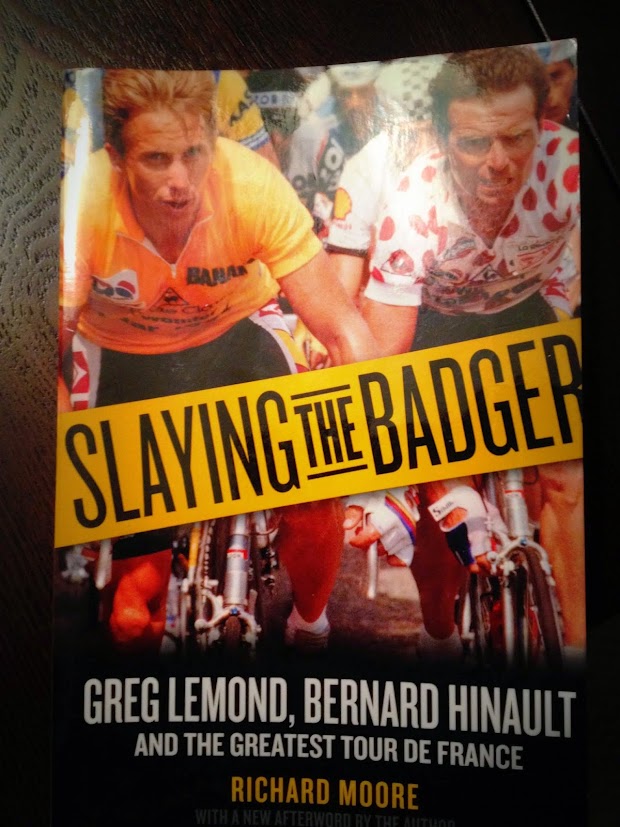 About the only thing not to like about “Slaying the Badger” is the title, which seems to bring to mind–at least among cyclists–a particularly aggressive form of an activity not typically written about in a family friendly blog.  This book isn’t about that.  It’s about the epic 1986 Tour de France (TdF) battle between La Vie Claire teammates Frenchman Bernard Hinault (the slain Badger of the title) and American Greg LeMond (he who slew), during which LeMond accused Hinault of reneging on his “promise” of support and trying to win the Tour for himself.

The book, authored by Richard Moore–a former competitive cyclist turned writer whose insider perspective will be appreciated by other cyclists–is a particularly well spun version of a story you probably already know.  But even if you know the story, I suspect you’ll learn a lot from the book and be thoroughly entertained in the process.  It is strong in both character and plot, containing several themes found in great literature–betrayal, clashes of civilizations, clashes of generations, madness, heroic persistence, romance, crapping in your buddy’s hat *while riding a bike*…  That last one is probably specific only to cycling literature, but it does show that LeMond’s generally unheralded bike handling skills paid dividends (so to speak) in any number of unanticipated ways.


As compelling as the plot is, the story is really driven by the characters, of which there are many.  Blogs are short, so I’ll focus on only four, but others bear calling out, including Greg’s wife Kathy LeMond (the romantic subplot), American teammate Andy Hampsten (the nicest man in the peloton), pioneering American rider Jock Boyer (not the nicest man in the peloton), and sundry other old pros and cycling movers and shakers you probably have heard of.

Moore does an excellent job of fleshing out the four primary characters of the story.  The first, Bernard Tapie, was the owner of the La Vie Claire health food retailer and also owned the La Vie Claire cycling team, which gave him a measure of control over the team that sponsoring companies rarely have.  Tapie began his career as a lounge singer on a cruise ship before becoming an entrepreneur who owned not only a cycling team but also a soccer team.  Befitting a personality Moore describes eloquently, Tapie eventually served time for a match fixing scandal.  For Tapie, no publicity was bad publicity, and he was more than happy to gin up a soap opera of a cycling team to get it.

The second behind the scenes character is Paul Kochli, the team’s directeur sportif, who is the closest thing to a mad scientist you’re ever likely to see in cycling, or just about anywhere else for that matter, so much so that no one would be shocked if he let fly with a bwa-ha-ha at any moment.  (If you happened to see the interviews with him in the 30-For-30 ESPN episode “Slaying the Badger,” which is a nice complement to the book, you’ll see this immediately.)  Kochli was either a science minded genius decades ahead of his time, or he was whacked out of his gourd.  It turns out that one of the problems with being a mad genius is that no one can distinguish between brilliant decisions that just can’t be understood by mere mortals (my go to gambit, which inevitably fails) and straight-up delusion, and in the course of this story it isn’t obvious if and when one or both were in play.  Either way, it is clear that Kochli was willing for any of his riders, even designated domestiques like Hampsten, to attack at any time.

Then there is Greg LeMond, the only rider in the world in 1986 who was in Hinault’s league.  LeMond, the uber-talented American upstart who didn’t see the point in conforming to the sillier social norms in the European peloton–rendering him somewhat less than universally beloved–rode successfully in support of Hinault in the 1985 TdF, for which Hinault (more or less) promised (in the heat of the moment) to repay LeMond in the 1986 TdF.  Whether he held to that “promise” is the gist of the story.  At times, LeMond comes off a little whiney and paranoid, though if you read the book, you’ll certainly understand why.  I came away with a richer understanding of LeMond, though it largely conforms with the view I had going in, namely that he’s a cycling god.

In many ways, Hinault is the most interesting character in the story.  He was famously combative–hence “the Badger”–and he played the role of patron in the peloton with relish, doing it in a completely badass way.  In one instance, the peloton disobeyed one of his dictates regarding pace, and he punished them by moving to the front and riding the entirety of the group off his wheel.  As a GC!  (In the modern era, the GC would probably just sic one of his thug lawyers or PR flacks on the offending parties.)

But as surly as Hinault was, Moore paints a more complex picture of him and the atmosphere in France in 1986 that left me far more sympathetic to Hinault’s situation.  His former teammates generally have nothing but good things to say about him, describing him as a gentleman–albeit in a badgerly way–who would ride in support of his team.  At the time, neither the French people nor the European peloton wanted to see an American win the race, which they made clear to Hinault, up to and including offers from certain riders to take LeMond out if Hinault just gave the word.  Hinault even received a call from the president of the country encouraging him to ride his own race, ostensibly to protect his country’s honor.

So there you have it.  A team owner who sought any kind of publicity for his team, a marginally whacked out brilliant directeur sportif who refused to anoint *any* rider the team’s designated GC contender, a supremely talented and ambitious upstart outsider, and a legendary still-in-his-prime old school insider who is feeling the heat to win one for his country and his generation.  What could go wrong?

Plenty, it turns out.  And Moore tells the ensuing story in a compelling and entertaining way.  In Rob’s rating system, Slaying the Badger is a podium finisher.

Note: Slaying the Badger is published by velopress and is available in print/ebook. I have a copy you can borrow. Shoot me an email.

Jon is utterly fascinated with aerodynamics & racing strategy. He is a billy goat on the bike and a professor at the University of Arkansas off the bike. – OCA